Blog: Is It Possible to “Recession Proof” Your Purchase?

Is It Possible to “Recession Proof” Your Purchase?

With the change in today's economy and the "recession" that we may or may not have had or may or may not be in, housing can take the hardest hit. So whether you are purchasing a home in a sellers market or a buyers market, is there such a thing as purchasing a house that will take less of a hit in a recession? I believe the answer to this question is YES!

I was doing my daily review of Red Deer's "hot sheet" (which is a list of the activity for the day on properties such as new listings, conditional properties, sold properties, price changes, etc.) and I noticed a house that looked familiar so I did a history search on the property. Sure enough, the Historical home was one I remembered when it was listed back in 2007. At that time, the house was listed for $519,900. As I was reviewing the listing in 2007, I felt the list price and the details of the home just didn't add up. The property was a 1,549sq ft 2-Storey split which is small above grade square footage for a 2-Storey home. The 1912 built home had a detached single garage and the listing did not indicate that any mechanical upgrades had been completed such as windows, furnace or the roof and the pictures presented a very dated interior with little upgrades to flooring, cabinets and bathrooms. The Downtown location was surrounded by commercial property and two very busy streets. The zoning appeared to be a residential/commercial mix which might add some value. I remember thinking to myself, even though I was less than a year in the business, "wow, that house is really overpriced based on my experience with buyers and the analysis of sales data. What am missing?" To my astonishment, just 36 days later on July 8, 2007, the house sold for $480,000. Of course in complete disbelief, I ran all of the previous sales from January 1, 2006 to July 1, 2007 in Red Deer that were built between 1900 to 1930 to find out what I didn't understand. The search resulted in just two houses selling for over $350,000 in that eighteen month period which is not enough data to come to any type of statistical conclusion on why the sale price would have been high, in my opinion. But market value is the value at which a buyer is willing to pay and a seller is willing to sell.

Fast forward to November 5, 2011 and here is that same property in foreclosure with a current price of $289,900. A history of the previous listing activity shows that the person who bought the home on July 8, 2007 put it back up for sale on October 21, 2008 just a little over a year after they purchased it with a list price of $505,900 which I am guessing is to compensate for the newer windows, electrical, plumbing, furnace and hot water tank that now appeared in the description. Not to mention the change of date for the year built which was now changed to 1929 in the listing. After dropping the price to $492,000 and spending 182 days on the market, the property did not sell. On July 2, 2009, the property was re-listed for $499,900 and another unsuccessful 239 days on the market. Sadly, on October 7, 2010 the property was listed by the bank, indicating the home had gone into foreclosure. The initial list price with the bank was $399,900 and dropped down to $358,900 over a 90 day period on the market. The house was re-listed again on January 24, 2011 at a price of $338,900 and has been on the market for 285 days with a current list price of $289,900. From the data in the system, we are not able to tell whether or not any offers had been received and rejected by the seller(s) so there could have been a buyer out there sometime between October 21, 2008 and November 5, 2011 that may have been willing to purchase the property at a higher price. But here it still sits, still unsold at a current list price of $289,900.

Despite all other circumstances, is a $190,000 price difference in par with the average drop in housing prices that we experienced from 2007 to 2011? My answer is NO! So what happened with this particular property?

Based on my experience with buyers and the volume of sales I have completed since I started in the real estate industry in 2006, I have developed what I call a spectrum of purchasing a good resale home. This spectrum can help assess the level of risk a buyer takes when purchasing a property for future resale potential. Depending on a buyer, what they need and what they want may or may not jive with what would be defined as a good resale home.

One end of the spectrum is labeled as a "good resale home". Buyers who are aiming towards this end of the spectrum are focusing on properties that have good resale value. Items such as square footage, location and buyer trends are what they focus on. These buyers are willing to sacrifice their wants if their wants are not in line with what would typically be defined as a good resale home. For these buyers, my experience becomes very critical because I can provide valuable information to them for their decision. This is the less risky purchase and recommended for a buyer if they only plan to be in their property for a short period of time.

On the other end of the spectrum is the "challenging resale home". Buyers who end up at this end of the spectrum are not concerned with resale value and are choosing a home based on their own needs and wants. Buying at this end of the spectrum doesn't necessarily mean that you are going to purchase a home that is going to lose $190,000 in value in 4 years as my example above did, rather it just means that you might have to stay in your home for a longer period of time. So if you are making a purchase based on what you want and it is not in line with what has been defined as a good resale home, I would recommend that you see yourself staying in the house for at least seven to ten years.

Of course, the next question I always get is, how do I know what a makes a good resale home? This is where I add value to the buyers I work with in their home search. My experience with the volume of transactions I have done since I started selling real estate in 2006 has given me the ability to learn a lot about properties. But the deeper level of understanding comes from my ability to analyze sales data. This skill comes from my past experience working as an analyst outside of the real estate industry. I use a variety of techniques to analyze data and then I share the interpretation of this data with my buyers who can use that information to make an informed decision. I have had a variety of buyers on both sides of the spectrum, some buying a good resale home and others buying a home that may have significant challenges for resale but fits well with what the buyers wanted. Both types of buyers on either end of the spectrum are grateful for the information that I can provide to them which allows them to make an informed decision. Making informed decisions when purchasing a home is critical in today's market.
So referring back to my earlier example of the house built in the early 1900's, this would have been a property that I felt weighed heavy on the resale spectrum of a more challenging re-sale property which is why I reacted the way I did back in 2007 when I saw the sold price. Unfortunately, now that the market has changed in a negative way, the price has been greatly impacted (there could be other factors that we are unaware of as well). There is also something I call "artificial value". For whatever reason, some of these older or "historic" homes were receiving premium prices just because they were old. The artificial value was intangible as it didn't reflect square footage, lot size, garage type or any other tangible feature rather it was a trend at that moment in the market which created a perceived value.

I recently had a client send me the following text message as they were removing conditions on the second of two properties they were selling as they moved out to BC:

I represented these clients on two purchases, one in December 2008 and another in October 2009. One property was used as a revenue property and the other was going to be used as their new primary residence. They owned a third property that they had decided they would rent out when they moved into their new home. When they purchased these properties in 2008 and 2009, they had no intention of selling either one anytime soon but an opportunity arose and plans changed. Shannon & Gord were fortunate that when they purchased both of these properties they followed our guidelines for a good resale property AND also ensured the price they paid was on the lower end of the spectrum for market value. When the opportunity arose in 2011 to sell two of the three properties they just recently purchase, they were in a good position, even though housing prices had been declining since 2008. The revenue property had been purchased in December 2008 and they spent approx. $4K finishing the basement while they owned the property. It sold in August 2011 for $308,500. Their primary residence was purchased in October 2009 for $465,000 with approx. $30,000 added to the property for a secondary detached double garage & stainless steel appliances and it sold in October 2011 for $510,000.

In fact, of the 180 buyers that I have represented in a sale since 2006, just 10% or 19 of these properties have been sold again between 2008 and 2011 (there may be additional sales completed privately that I am not aware of). I have created a table showing 12 of the 19 sales below. The other 7 properties not included in the chart below included 4 foreclosures which were not listed by me & 1 property which was not listed or sold with me. There were 2 anomalies, one was a private sale that had a return of $135,000 and the other was a sale in Blackfalds that was a relocation which lost $27,500 due to the aggressive pricing used, both of these have been excluded from the chart as we consider these to be anomalies.

From the 12 sales below, on average, my buyers who then became sellers between 2008 and 2011 ended up with an average gain of $6,400 when they sold, even though the average price of houses was in a decline in from 2006 to 2011. I would attribute the positive return on these sales to my clients purchasing houses that were on the end of the spectrum that has very strong resale or by getting prices that were on the low end of the market value which helped to compensate for the decline in prices between 2008 and 2011. Some of the 12 buyers had planned to be in their homes a long time and others knew when they purchased the property that they would only be in their homes for a short period of time. I should note these purchases were not made with intent of "flipping". Here is how my clients fared in a market (2008 to 2011) where prices were declining (or commonly referred to as selling in a buyers market): 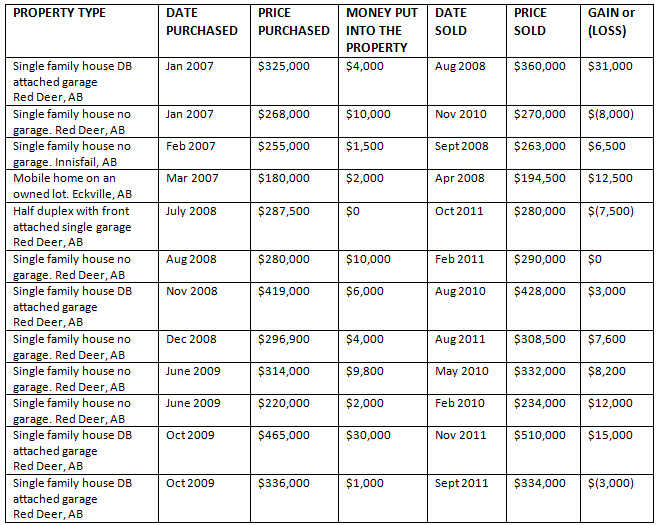 The data included in this display is deemed reliable, but is not guaranteed to be accurate by the Central Alberta REALTORS® Association